Just now while preparing for bed, I had a train of thought that led to an interesting conclusion.  It began when I thought about the coming election in the autumn, and what portents it held for the future of our nation.  Will the victorious candidate be the one the people supported, or the one who was able to broker the best deal with the wealthy elite?  When I thought of this, the thought crossed my mind: “Hail the American Empire!”  As sarcastic/cynical as that may sound, it’s not exactly wrong.

The United States has wavered toward becoming an imperial oligarchy pretty much ever since the Monroe Doctrine in 1823.  We were not yet fifty years old as a nation, and yet with President Monroe’s statement, we declared ourselves to be equals with the European powers of the time, who controlled globe-spanning empires.  It was a statement of “if it happens in our vicinity, it’s OUR concern;” the United States marked the borders of its influence in the West.  We edged closer with the Spanish-American (-Cuban-Filipino) War in 1898, when we began establishing ourselves as a true global power.  Now, with the president and Congressional members granting themselves favors of money and power at the expense of the people, we approach the edge of the knife that will divide republic from oligarchy. 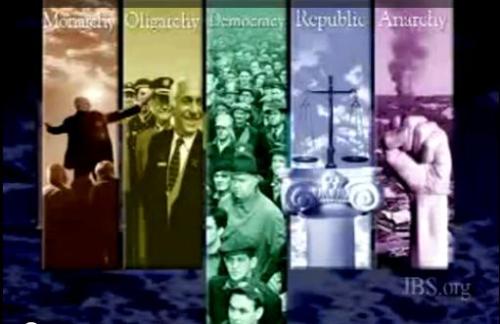 It struck me that, if America does transition into empire, then we as Christians have three basic options.  I credit Pastor John Johnson of Covina Assembly of GOD for these; he used them in a sermon I attended during my latter years of undergraduate study at APU.  Conformity is the wrong move altogether, so we can either: 1) Confront the system, 2) Abandon the system, or 3) Transform the system by remaining in it and living as GOD commands us to do.  This may not involve living by the letter of the law, as the law(s) may conflict with His holy standard, but we should always strive to live in the spirit of GOD’s Law, which no government of humanity can ever change.

The reason why I think the third option to be the best is because of the consequences of the first two.  By confronting the system, we are standing up for what is right, but we make ourselves a nuisance in the eyes of the world and lose chances to show compassion and love; by confrontation, I mean the extreme – attacking from every side, never letting up.  We are indeed called to speak the truth, but in a spirit and manner of love; besides, the target of our attack should be the unjust lifestyle of Antichrist, not the poor souls trapped in bondage to it.  By abandoning the system and going our own way, again we miss out on opportunities to reach out and touch the lives of those trapped in sin, and in so doing, we fail to follow the Great Commission.

All this leads me to lean towards the third option – transforming the culture by interacting positively with those within it.  This could be described as a fine line, but not so much so long as we remain grounded in the Bible, the unshakeable foundation of our faith.  When the world observes the way we live and act as genuine followers of Christ, they will be touched; from there, it is the Holy Spirit’s job to speak to their hearts – and our job to follow the Spirit’s lead.  We are called to be witnesses, evidence of Jesus Christ and the Holy Spirit working in our lives; while we are not yet finished products, the change/difference should be observable to all with whom we interact.  Too often, we and the world focus on the “negatives” of Christians failing to live up to their expectations; if we focus more on the emerging form of Christ and less on the remaining human flaws, then we will have a new focus and perspective to present.

My final word for now is as follows, and I hope it imparts comfort and wisdom to you, the reader.  I pray that GOD would show you what He would have you see and guide you in applying it in your life:

“You don’t necessarily have to become a martyr to be an example of living out what is right; all that is required for that is to be a witness.”