Jadis, better known to Narnia fans as “the White Witch,” is a very enigmatic figure. We learn early on the series that, for all her physical appearance, she is NOT human. But just exactly where/whom DOES she descend from? The Beavers (The Lion, the Witch, and the Wardrobe) help to fill in these details.

According to Jewish mysticism, Lilith was a woman made from the same dirt/dust that Adam was. It is claimed that Lilith refused to accept a position as Adam’s “inferior” and left Eden, starting her own race after joining with a (fallen?) angel named Samael. Furthermore, she was described as being sexually promiscuous – which is all theologically inaccurate according to Biblical record. However, the accounts referring to her give reference to another race that was reported to have a mingling of physical and spiritual origins.

Father’s side
Mr. Beaver: “And on the other she comes of the giants.”

The “giants” I think of when I read this are those like Goliath, the “sons of Anak.” They are seen before and after the Flood, and there has been some debate about where they came from. Genesis 6 reference a union between the “sons of God” and “daughters of men;” one theory postulates this to be an intermingling of the descendants of Seth (Adam & Eve’s 3rd recorded son) and Cain (Adam & Eve’s 1st recorded son). The more interesting theory, I think, points to a mingling of fallen angels (“Nephilim”) and humans (somewhat similar to the mythology surrounding Lilith). According to Jewish scholars, this would be an extension of the Fall and the chaos it wrought on creation – humans and angels were separate creations, and it was never in God’s design for them to intermingle. The giants/”mighty men who were of old” are enemies of Israel, and and face them time and again throughout history from the lifetime of Moses (during the Exodus) to the reign of David (time of the first 3 kings). 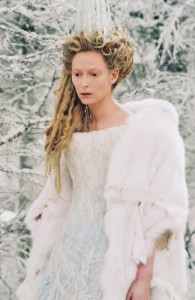 Conclusion
As Mr. Beaver puts it, “No, no, there isn’t a drop of real human blood in the Witch.” Humanity is defined as people descended directly from Adam and Eve, and Jadis has absolutely no part of their bloodline.