Looking at two of the most famous/infamous dictators of the twentieth century, I notice an interesting contrast. In climbing his way to the top, both Hitler and Stalin exhibited a distinctive mindset in how to overcome their adversaries. Psychologically speaking, the two men are mirror images – their mindsets exact opposites.

As ruler of the Third Reich, Adolf Hitler set about “proving” that the German people were better than any of the nations that sought to oppose them. Hitler had the benefit of education (even though he dropped out during his mid-to-late teen years). Living in a Germany that had been deprived of its imperial status, he and the Nazis sought to “reclaim” the past and prove that Germany was better at warfare and production than any of the democratic Allies.

If the superiority complex was portrayed as a ladder, Hitler and the Nazis sought to fight their way to the top – regarded as their natural place in the world order they sought to create – and prevent anyone else from claiming it.

Exhibit B: the Inferiority Complex 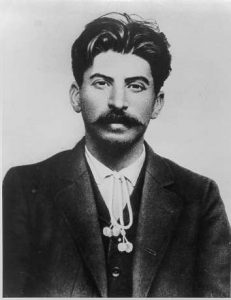 Joseph Stalin, on the other hand, was born into a poor family and dropped out of school during his childhood. In his younger days, he had been weak and sickly; growing into a healthy, strong man, his early experiences still haunted his mind and affected the choices he would make later on. Even after joining the Bolsheviks, he served as a “nuts-and-bolts” revolutionary – while Lenin and Trotsky hammered out ideology and strategies, Stalin was the one doing the dirty work, which he excelled at. As a result of his educational failings, Stalin grew to mistrust intellectuals, who seemed to have an unfair advantage over other people (not unlike the bourgeoisie and upper class of Russia). Biding his time until after Lenin’s death, Stalin gained the trust of his fellow Bolsheviks and took over the Soviet Union, not only sending Trotsky into exile, but also purging the U.S.S.R. of all intellectuals – ironically leaving Stalin as the guiding mind of the Soviet Union’s future.

Returning to the ladder analogy, Stalin put himself at the top, but through a different means than the method Hitler employed. Rather than struggling past everyone above him, Stalin merely sawed the ladder off at his level and declared himself to be at the “top.”

Ironic, isn’t it? Each man wanted to be the “best” and yet the ways they went about it were totally different, even though their ultimate goals were practically identical.