For many years, we’ve heard the term “seven deadly sins.” What are they, and what exactly makes them so deadly? Those are the questions I will endeavor to answer in this post, and to add some flavor to the philosophy, let’s see what Disney villains epitomize them. Let’s begin! 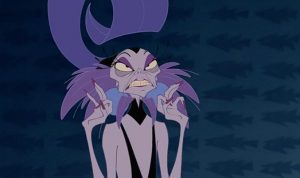 Without a doubt, Yzma is extremely self-absorbed; if Narcissus had a female counterpart, Yzma would DEFINITELY be a great fit. She serves as Emperor Kuzco’s “adviser,” but she always tries to run things her own way. When Kuzco is “removed” after becoming a llama, Yzma wastes no time in installing herself as the new ruler and erasing any trace of him from the world, even hunting him down to kill him. All of this reeks of pride – it is the central drive for domination and hunger for power. 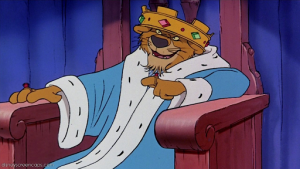 In classic lore (and Disney), Prince John is portrayed as a cowardly little upstart who tries to take everything that (by rights) his brother King Richard has – gold more than anything else. While he also desires his brother’s power and position as well, his primary passion is to amass wealth for himself; in money, John finds happiness. He wears it, handles it – he even SLEEPS with it in his bed! In this, John proves himself to be highly materialistic – the more he can possess, the greater his “happiness.”

His obsession with money may stem from a desire for stability – John’s royal childhood was not an easy one (losing his father’s favor, battling with Richard for their mother’s affections, managing England while Richard was away on crusade), and money may have been his escape. Money bought power, stability, and a certain measure of peace. However he sought it, more negative effects occurred than positive. 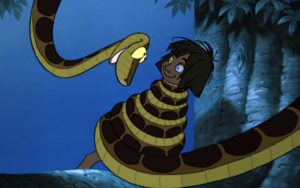 As a snake, Kaa is crafty, sneaky, and methodical; however, he is not driven by power or dominance – his place in the jungle’s food chain is clear and secure. His primary goal is to fill his belly with whatever he can – in this, he is a primal villain, hungry for a full belly and contented appetite. Setting his sights on Mowgli, Kaa pursues him as a gourmet diner would pursue a delicacy, abandoning his quest only when he finds the hunt to be more trouble than it’s worth. 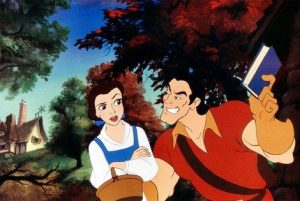 Gaston is prideful like Yzma, but his goals are different. He is already the center of attention in the community, hailed as a conquering hero, the “pure paragon” of manhood; the one woman resistant to his “charm” is Belle, whom Gaston desires to be his wife. Everything he does – from arranging a wedding, having her father falsely committed to an asylum, even battling the Beast – is done for the sake of satisfying his desire to have Belle as his and his alone.

Interestingly, the movie that portrays Gaston has an interesting twist. In Beauty and the Beast, many of the characters undergo objectification (“to present as an object, especially of sight, touch, or other physical sense”); the servants of the castle become the objects of service that their master equated them as, the prince himself becomes the Beast (as he was in his heart), and Gaston tries to objectify Belle as a “trophy wife.” In a way, lust is all about objectifying people – making them an object to fulfill the desires of the person who lusts after them. In that sense, both Gaston and the Beast are pictures of lust, but with opposing outcomes – the Beast overcomes it (truly viewing others as people) while Gaston is consumed (and destroyed) by it. 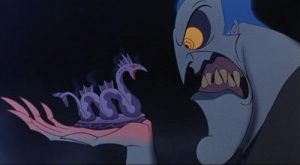 It’s easy to see how well Hades fits the spot. While he exhibits a cool and calculating personality, his composure is all too easily set ablaze by an unexpected turn of events; his emotions seem to have only two settings – calm or furious. In the background of his personality are feelings of covetousness and envy – he envies the position of his brother Zeus and covets the power and influence that the position. His fierce temper dominates over all, however, and his minions must stay on their toes (and out of reach) if they are to avoid feeling (literally) the consequences of his displeasure, which he is not hesitant to mete out. 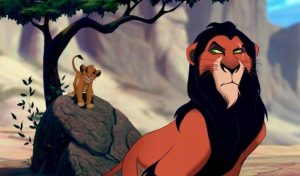 Scar is very much a contrast to Prince John. While both have older brothers who reign as warrior kings, Scar desires position, not possessions. In written media, Scar is shown to have tasted true power before the events of The Lion King, but that power was stripped from him, and now he seeks absolute power that NO ONE can take away. As Mufasa is seen as the pinnacle of power and influence, Scar desires to assume his brother’s position and become everything that Mufasa once was.

More than that, however, Scar desires to stand out; like Prince John, he becomes angry and threatened every time he feels overshadowed by his older brother. In this sense, Scar’s envy partially stems from an inferiority complex – like Jafar from Aladdin, he hates everyone who makes him feel like “second best.”

Drizella and Anastasia are the stepsisters of Cinderella; growing up with a mother who spoiled them, they become VERY lazy, seeing their beautiful stepsister as a means of serving their selfish desires (objectification again!). They do no labor, spend all their time shopping or in artistic lessons, and squander their family fortune in pursuit of refinery that they later despise because it’s not “new” anymore. Their mother is, for the sisters, a source of authority, income, and satisfaction – as long as she is there to give direction to their lives, they need not lift a finger or do anything original, because she (and Cinderella) are there to oversee (and take care of) the details of life.

While I didn’t see the sequel movies, I read about them, and was glad to see Anastasia grow a bit – she pursues a life outside of her mother’s control, finds true love, and even becomes Cinderella’s friend. Drizella, on the other hand, is content to remain a companion (and mirror image) of her mother, and shares her lot to the end.