In my social studies/history classes, a key point I try to make to my students is the difference between ideology and methodology. In judging a government or a group, it is not enough to look at their beliefs – one must also examine how they attempted to bring them about. These two factors are, in essence, two sides of the same coin; if we look at each of them, we can discern a clearer picture of those who espouse them and what they mean to achieve.

Let us examine the two sides of the coin, shall we?

IDEOLOGY (WHAT you want)

On the one hand, the goals that people attempt to reach depend on their ideological stance. The spectrum on which this is measured is shown below: 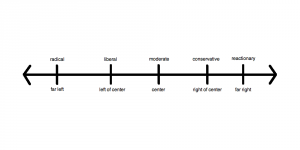 The spectrum of right to left is derived from views of the old and new, or change vs the status quo. Moderates try to balance the two, but those on the left and right are a bit more polarized. The right favors the status quo, while the left prefers change; those on the extremities try to remove one and replace it with the other.

For example, Radicals (the Far Left) will attempt to pull down the Old and build something New from the ground up. On the other hand, Reactionaries (the Far Right) will try to remove the New and RE-build something Old.

By the reckoning of some, these two sides are ALWAYS opposites in every possible way. However, a closer examination reveals certain similarities – one in particular.

METHODOLOGY (HOW you do it) 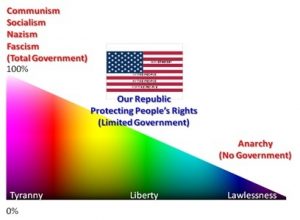 Here is where the confusion often kicks in – too often, people consider freedom to be a “radical” ideal. However, it truly exists between absolute control and chaos.

The opposing sides of methodology weigh the will of a group versus individual independence. The far right values individual effort while the far left seeks group efforts to achieve their goal(s).

Thus, both the Nazis and Communists of the 20th century can be placed on the far left, even though their ideologies were almost completely opposite (fascism was reactionary, and communism was radical, yet they both achieved power through totalitarian dictatorship). Chaos (“everyone for themselves”) is often employed as a means of achieving absolute power; people are so desperate for order (and a chance to live without fear) that they will accept any order, even though that order may end up oppressing them even more.

The best government exists under republic (rule by law), since even democracy can be oppressive (majority trampling minority). Under this system, ideology and methodology can meet in the middle, and everyone is held to a universal standard. Of course, constant maintenance is still required, as any republic will fail if people do not maintain laws or government accountability.