Whenever people hear the word Nazi, they often think of Adolf Hitler and World War II. We think of the death camps, testimonies of Holocaust survivors, and we think with relief, “Thanks goodness that’s in the past.”

Before we go any further, let’s take a step back and review just what Hitler and company believed. 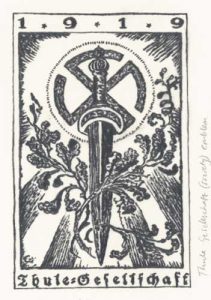 The symbol above represented the Thule Society, a quasi-occultic group that became the voice of religion for the Nazi regime.
They helped to spread the Nazi ideals:

1) all-powerful government (one leader, one state, one economy)
2) a culture of war (strong military, aggressive nationalism)
3) cultural/racial identity, “religion of the blood” (“superior” race of Aryans)

What would surprise many, however, is how widespread Nazi beliefs continue to be.

How is it possible that Nazism continues to exist so long after the death of Adolf Hitler? A simple answer: Nazism adapted to the new situation. Hitler and his followers made a huge impact with the technology and mindset(s) of their time; in the present day; neo-Nazis continue to make use of communications, media outlets, and most importantly the willingness of people to follow a cause – sometimes ANY cause – and spread their beliefs wherever they go.

Shockingly, Nazism has even managed to resurface in the one place that has worked hardest to eliminate it – Germany itself.

Perhaps one of the scariest moments of the latter 20th century happened in Palo Alto, CA during the year 1967; Ron Jones, a history teacher, demonstrated for his students (without revealing the source) the methods used by the Nazi Youth to brainwash young people, giving the lesson series a name: “The Third Wave.” 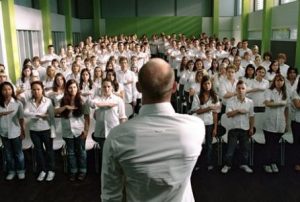 Only twenty-two years had passed since World War II, and not only were the kids unsuspecting, but they EMBRACED the movement! In fact, there came a point where Mr. Jones almost lost control – the kids were acting independently, recruiting from the entire school and acting against perceived “threats.” Only a timely intervention prevented the birth of a full-blown American Nazi movement.

Surprised? In the 1980s movie that dramatically re-enacted the Third Wave experiment, the teacher says this: “Fascism isn’t something those other people did – it’s right here, in all of us.” What does he mean? The issue that spawned Nazi rule – group will and action at the expense of morality and individual freedom – occurs in every generation, and (to a degree) we all face the same choice as the people of Hitler’s day.